6 Helpful Tricks to Calm Nerves in a Job Interview

In this guide, Mock Questions explores six helpful methods for combatting job interview nerves. Regardless of how prepared you are for a job interview, nerves can unexpectedly come up and threaten to throw you off your interview game. Use these approaches to change your mindset, grow your confidence, and deliver your best interview performance!

Interviews can feel a lot like public speaking - a fear that is believed to impact nearly ¾ of the population. Even the most prepared candidate can get caught up in the job interview jitters. We've all experienced the shaky voice, trembling hands, and the cold sweat that comes with nervousness. It's okay - you are human!

Here are 6 simple methods to help you calm your nerves.

Billie Jean King started her competitive tennis career in 1959 and won 20 career titles at Wimbledon. She also ranked as the #1 tennis player in the world for many years. Billie Jean King attributes much of her success to the practice of visualization. Before a game, she would visualize what could go wrong and how she would handle these roadblocks. She would even imagine where she wanted the ball to go when she hit it.

Visualization is a method used by the world's most elite athletes. Like Billie Jean King and other athletes who train for mental toughness, you can use visualization to prepare for a job interview and calm your nerves.

Your mind responds incredibly well when you create a clear mental picture of what you wish to achieve.

"The key to effective visualization is to create the most detailed, clear, and vivid picture to focus on as possible. The more vivid the visualization, the more likely, and quickly, you are to begin attracting the things that help you achieve what you want to get done." "” George St-Pierre, Professional MMA Athlete

Play the Game: "˜What's The Worst That Could Happen?'

"˜What's the worst that could happen?' is a mental game I have leaned on for many years and in all types of situations. This little game even helped my son when he was nervous about his first day at a new school.

To start, think of your absolute biggest, more terrible fear as it relates to your job interview. It can be as real as forgetting the interviewers' name, or as ridiculous as splitting your pants the moment you sit down.

Next, think about the worst-case scenario if that fear came to life. In short, if this fear came true, what horrible impact would it have?

Then, make a plan to overcome the situation. If this nightmare came true, what would you do?

Some common interview fears include:

Here is an example of the "˜What's the Worst That Could Happen?' game in action:

THE FEAR: You are late for your job interview.

THE WORST CASE SCENARIO: The interviewer refuses to see you now that you are late.

THE PLAN TO OVERCOME: Map your route the day before and give yourself 20 extra minutes for unexpected hiccups such as a traffic jam. Make sure that you have the contact information of the interviewer/office on hand so that you can make a quick call if you sense that you may be late.

When you get down to the granular, the very worst thing is that you don't land the job. In that case, you pick yourself back up, and you move on!

Reminding yourself that this is not a life or death situation will help get you out of your head, it will increase your ability to shake off nerves, ensuring that you are more present in your interview.

The STOP method is connected to cognitive-behavioral psychology, and you will often see its use in mindfulness practices.

STOP is an acronym for:

In your job interview, if you feel the nerves coming on, you can:

For instance, let's say that "˜Candidate Cathy' realizes she is speaking nervously in her interview. She's talking too fast and can feel that her interview answer is going off the rails due to nerves.

Cathy can choose to stop speaking, and she can say to her interviewer:

"˜My apologies - I just realized I'm speaking quite fast. I'm very excited about this opportunity and also a bit nervous as it's been a long time since I've interviewed for a new role. May I start again?'

By stopping, Candidate Cathy acknowledges her current approach and is transparent with her interviewer, which can break the ice and build trust.

Candidate Cathy can then take a breath, observe the fact that she was honest about her nerves, and proceed with her answer in a calm and collected manner.

For the most part, nerves come from the negative stories that we tell ourselves. We imagine ourselves screwing up, looking dumb, being unlikeable, or giving a nonsensical interview response. Cognitive-behavioral therapists often refer to these beliefs as "˜thought traps.'

The great news is that these fears and "˜thought traps' don't have to become your reality. By changing the "˜story' that you tell yourself, you can boost your confidence and help to keep your nerves at bay.

Think about the most challenging life situation you have faced in the past. You overcame the situation and, in the end, you were just fine!

Take the time to reassure yourself in the form of an anthem or a mantra. A mantra is a short phrase that you repeat to yourself for added assurance.

Mantras are therapeutic and useful, and they are also grounded in science. Repeating a mantra can end up changing the "˜default mode network' in your brain. In short - where your mind's thoughts go when you are at rest. By retraining your "˜default mode,' you can develop more control over your nerves.

Try to incorporate "˜I am"¦' statements rather than the "˜I am not"¦' statements that tend to creep up when you are nervous or anxious about a job interview.

Pressure is a significant cause of job interview nervousness, and this pressure usually comes from the inside. Before your interview, take stock of your expectations and the stress or tension you are creating internally.

Assess what you want to gain from your interview and set realistic expectations for yourself and the hiring company.

Rather than spend your energy on huge expectations and outcomes (positive or negative), try to start smaller.

Reasonable expectations that you could focus on include:

Many job seekers feel disappointed after an interview because they fantasized that the hiring manager would be so impressed they'd get a job offer on the spot! When this doesn't happen, they feel that they failed and then psych themselves out for future interviews.

Opposite of this overshooting mentality, many job seekers tell themselves that they will be a failure because the last job interview was a failure. If you resonate with this statement, you may have a narrative in your mind that sounds like, "˜My last three job interviews ended in rejection. This one will be no different.'

Reduce the inner pressure, set realistic expectations of yourself and the hiring company, and see your job interview performance skyrocket.

The fear of rejection is the foundation of many job interview nerves. Nobody likes rejection, of course. The rejection that might come after a job interview is especially hard because it feels somewhat public and highly personal.

From a young age, most of us are wired to believe that rejection is bad. However, when we begin to see rejection as an answer and a gift, we quickly realize that if our worst-case scenario happened - not getting the job - the answer would be a gift in its own way.

So, what if you normalized rejection? Rejection isn't a bad thing. Rejection doesn't mean you aren't good enough.

If Jerry Seinfeld, Lady Gaga, and Lucille Ball absorbed rejection and viewed these instances as proof that they had no talent, we wouldn't have some of our most iconic entertainers!

When you begin to see rejection as a reality that happens to everyone, you also stop attaching it to your personal or professional value.

Normalizing rejection makes it much easier to dust yourself off and approach your next interview with more confidence. Remember that rejection happens for you, not to you.

When you walk into a job interview with the mentality that you're there to have a conversation and explore if the role is a good fit, you can put your nerves to rest knowing that -chosen or not - you'll get the answer that's right for you.

As a general statistic, the average job posting receives around 250 resumes. Boost your confidence by reminding yourself - you received an interview invitation from all those applicants. This interview invitation means that the interviewer wants you to be a fit for their job! A hiring manager does not want to spend endless hours filtering through resumes and interviewing 'dud' candidates. Remember, they WANT you to succeed in the interview.

And, if you happen to walk into the rare situation where the interviewer is unsupportive or purposefully trying to make you nervous, it's probably not a healthy place to work. Politely excuse yourself from the interview (yes, you can do that!) knowing that YOU are in control, and the right opportunity is around the corner.

You can access our coaching options if you'd like more help preparing for an upcoming job interview. 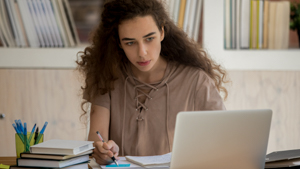 Preparing For a Last-Minute Interview? 4 Steps to Maximize Your Time 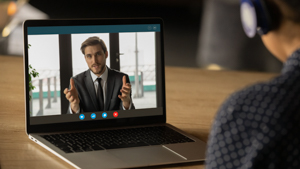 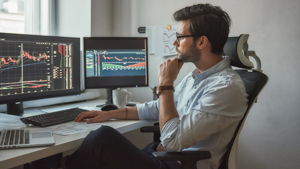 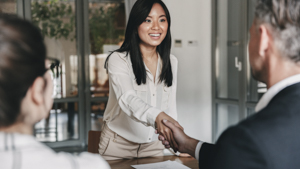 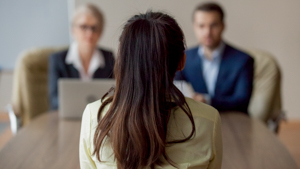 The Most Cliche Interview Responses and What To Say Instead

6 Helpful Tricks to Calm Nerves in a Job Interview 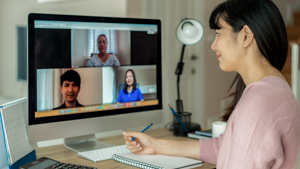 What You Need to Know About Work-From-Home Job Interviews 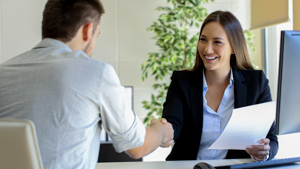 How to Discuss Salary in a Job Interview

Questions You Should Ask